“What is the one thing that is going to change the [RV] industry and make it different moving forward?”

That is the question that TITAN Sales & Consulting‘s founder Tobin Goode began asking the engineers of several RV manufacturers in Granger, Indiana. Back then, he was a salesman peddling molded/extruded parts and the engineers’ emphatic response changed the direction of his career forever: “fewer screws and fasteners, and more adhesives and tapes.”

Shortly thereafter, in 2002, Goode quit his job and founded TITAN in his garage. He was the firm’s first and only employee: obsessively studying products, finding suppliers, working his connections in the RV world, and extolling the virtues of stickiness to anyone who would listen.

Between then and now, TITAN had to move six times to accommodate their rapid growth. They now employ over 25 people, all meticulously selected and trained in the TITAN method. They have over 4,000 unique inventory items, and it isn’t just RVs anymore; TITAN’S line of products now spans any application in the construction, marine, trailer, and specialty vehicle industry. They were committed to revolutionizing manufacturing for their customers… and they succeeded.

In the pursuit of changing the game, TITAN built a brand new, 2.4 million-cubic-foot facility to house operations, then outfitted it with the absolute latest technology. They hired and trained a large team of specialists. They worked tirelessly to innovate new products that would solve their customers’ specific needs, ballooning the size and scope of their catalog. There was just one thing missing: a modern ERP to support all of TITAN’s increasingly complex processes.

Accounting software is not usually the first thing that companies think about as they scale. It happens gradually; they begin to notice that workflows that had always sufficed begin to fail. Sales begin to stagnate due to inefficiency or errors. Inventory adjustments become larger and more frequent. Occasionally, we have even seen the “beginner” software crumble under the added stress.

TITAN saw each of those examples firsthand. They had been running a piecemeal system that centered around QuickBooks. The biggest problem TITAN faced was a lack of inventory control; the amount of inventory adjustments was becoming increasingly unsettling. The second huge issue was the required redundant manual entry. Sales reps would visit a client site and create a sales order in Excel, then return to the office and manually re-enter the information into QuickBooks.

Tobin and his team had little visibility into the status of orders on a macro level, and customers had absolutely NO visibility. And then, to top it all off: QuickBooks had a massive database error that Intuit was not able to fix. That was the last straw for Tobin Goode; QuickBooks had to go immediately.

“What got us here won’t get us there.”

A company as complex and quickly-evolving as TITAN needs an accounting software solution that can handle the load, but also one that can adapt and scale as they do. They shopped around, spoke with several partners offering various ERP solutions, and ultimately decided on Crestwood Associates implementing Acumatica.

TITAN is a unique company with niche needs – even their “basic” requests appeared to require some customization. If that sounds like a tall order, it was. But guess what? It’s also exactly what TITAN received. 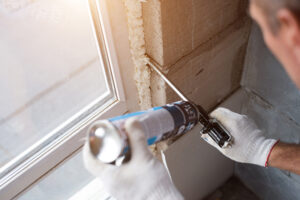 We knew from the start that this would not be a simple, straightforward implementation project. Crestwood Associates has a seasoned team of talented Acumatica developers and customization is our specialty.

The project was divided into two phases. The first phase consisted of replacing all the financials (GL, AP, AR) as well as SOP and POP, adding CRM functionality, and partially implementing JAAS Advanced Manufacturing Software (JAMS). We focused first on the most critical issues plaguing TITAN (the must-haves), and then planned to expand the functionality in Phase 2 (the nice-to-haves). Each module required some customization to fit their needs, but Sales Order Processing had the most.

Our team designed from scratch a “Mobile Sales Order” customization that completely streamlined the client site visit ordering process. We added a new button to Acumatica that allows for items to be selected from a “memorized” list.

Before Phase 2 began, we were able to solve their inventory control issues, establish automated email notifications for customers regarding their order status, build several custom reports, and centralize all financial processes.

With Acumatica and the help of Crestwood, Titan got their wish list: access to their system from anywhere at anytime, real-time data insights, customizations, scalability as they grow, inventory and warehouse management, reports, dashboards, KPIs, and no more disparate systems. If you’re looking at Acumatica, the right partner is always Crestwood Associates.